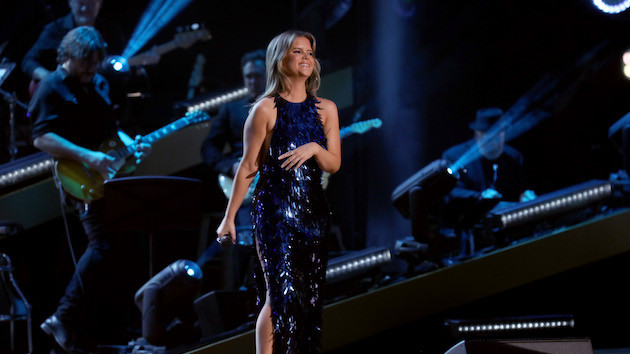 Maren Morris has long been a vocal supporter of the LGBTQ+ community, and in recent weeks, her support for trans youth has been particularly visible.

The singer made headlines following a fiery back-and-forth with Brittany Aldean, wife of superstar Jason Aldean, after Brittany posted an Instagram reel that thanked her parents for not "changing my gender" when she went through "my tomboy phase."

Maren, along with singer Cassadee Pope, flagged the comments as transphobic, and things continued to get heated, culminating in Brittany's appearance on Fox News' Tucker Carlson Tonight. Show host Tucker Carlson described Maren as a "Lunatic country music person," which she promptly made into a T-shirt, ultimately raising $500,000 for GLAAD and the Trans Lifeline.

Now, Maren is back with a second T-shirt design. This time, it's a purple tee for #SpiritDay, an October 20 initiative to raise money for GLAAD's push against youth bullying, that reads "You Have a Seat at This Table." That could be a reference to a lyric in "Crowded Table," a song released by Maren's band, The Highwomen.

"At its core, country music is for everyone," Maren explains in a new interview with GLAAD. "It's not just for one type of person. It's everyone's stories. It's storytelling. So yeah, I definitely feel like that became apparent over the last few weeks."

One-hundred percent of the proceeds of Maren's new shirt benefit GLAAD's work supporting LGBTQ youth. Additionally, she's partnering with Fandiem and Bandsintown for a sweepstakes supporting GLAAD; the winner will win a flyaway plus tickets to a stop on her Humble Quest tour and more. To learn more and donate to win, visit Fandiem.