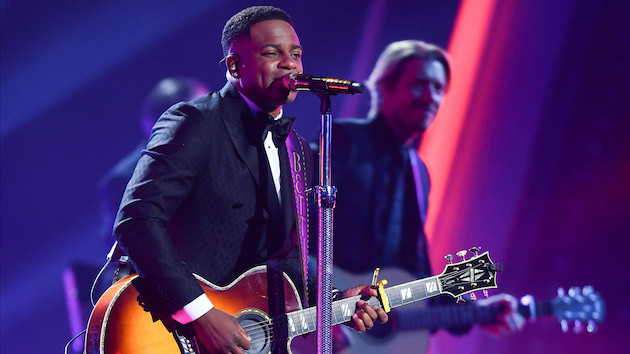 The ACM Awards aren't until Sunday, but Jimmie Allen's already a winner: He was named this year's New Male Artist of the Year ahead of the ceremony.

He's the first solo Black performer in ACM history to win a New Artist trophy, and he's not the only trailblazer so far this year: Kane Brown also became the first Black artist to win in his category when he brought home Video of the Year for "Worldwide Beautiful." But Jimmie says he hopes that in the future, Black artists winning country music awards becomes a much more common experience.

"My plan is hopefully, in 10 years, it's no longer a thing, you know?" the singer says. "We'll be just like every other genre of music...where you don't even mention the Black thing or the white thing or the Spanish thing or Asian thing. It's not even talked about. It's just: Here's the artist. Here's the song. I like the song or I don't like the song.'"

In the meantime, though, Jimmie's proud of his growing legacy in country music, particularly when it comes to his relationship with legendary Black country performer Charley Pride. Jimmie duetted with Pride at the CMA Awards last November. It was the 86-year-old's last performance before his death in December.  Now Jimmie's starting to hear some pretty powerful feedback from his fans, along the same lines.

"I've had parents DM me on Instagram and say that I am to their nine-year-old son what Charley Pride was to me. I was like, Jeez! No pressure,'" he adds with a laugh. "To have an impact on someone's life the way Charley had an impact on mine, it's just mind-blowing to me."

The ACMs air Sunday at 8PM ET on CBS.