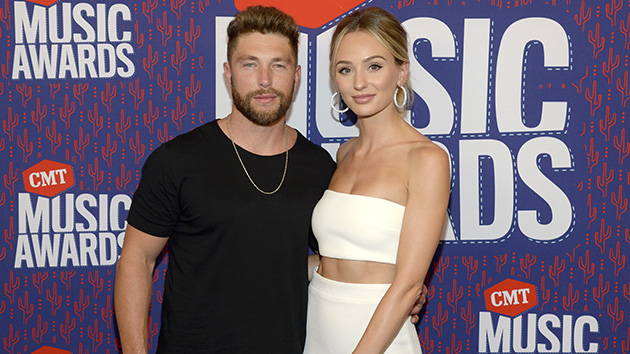 Rick Diamond/Getty Images for CMTFans saw the moment Chris Lane proposed to Lauren Bushnell in the first video for his hit single "Big, Big Plans." Now, Chris has offered some behind-the-scenes insight into the special moment during his and Lauren's appearance on Shawn Johnson East and Andrew East's podcast, Couple Things.

Chris reveals that while at Lauren's parents' house in Portland, Oregon for Father's Day in 2019, he explained why cameras were there by telling his future wife that he wanted to shoot photos and videos with her family.

"She had no idea what the real plan was," he says.

He also told Lauren that he had a new song he'd written specifically for her. Chris admitted he was a bundle of nerves as he started to sing "Big, Big Plans" in the backyard -- so much so that he went into the house in the middle of the performance to jot down a word on his hand so he wouldn't forget what to say.

"When that song started playing I blacked out. I was about as nervous as I could be," he recalled.

The singer said he was "trembling" as he approached the third verse with the lyrics "And I'm down on one knee/I guess she finally figured out/I'm gonna ask her to marry me," sending Lauren into tears.

"Thankfully, she said yes. Honestly I don't remember what I said in that moment because I was blacked out," he laughs.

"That might be the one time in my life where I've been the most in the moment, truly not thinking about anything else," Lauren reflects. "I was just so present that I don't even think I really was thinking about what was happening."

The couple wed in October 2019 and are expecting their first child, a boy, in June.